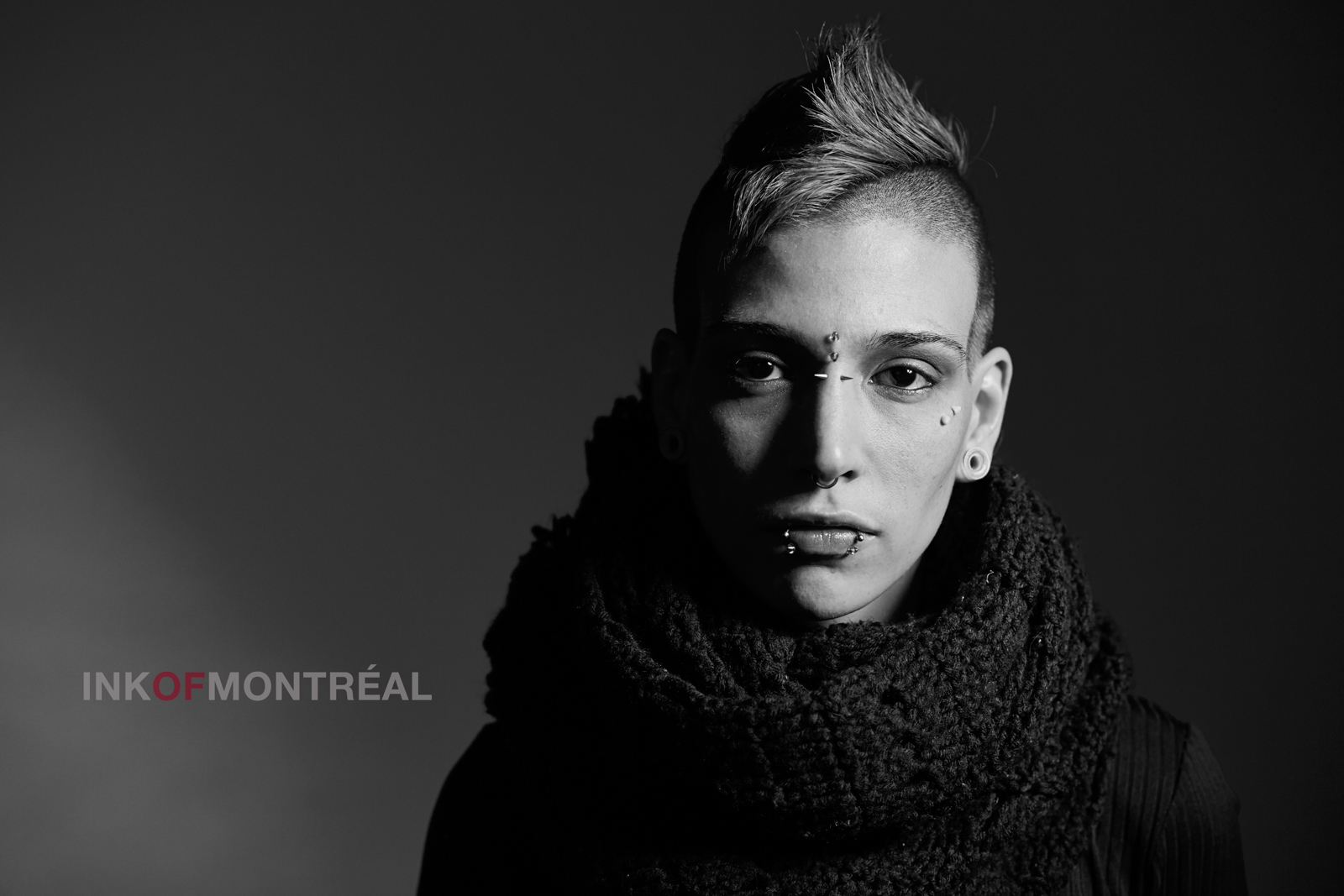 I am starting this project with an interview and a photo session with Priss (Death Kiss).

She is a model, performer and a very positive and energetic person in general. Right now she is concentrating more on performing than modelling and she wants to create a performance that will make people stop and think.

It was such a great experience talking to her and  she reminded me that freedom is something we should never forget. We get caught in everyday life and we forget to live in the present moment and we only have one life.

Here is a part of the discussion I had with her.

IoM: Where were you born?

Priss: I was born in Nante, in the north, it is in the countryside. I moved to Montreal when I was little, in general I moved a lot. I spent eight years in Ville Saint-Laurent, a few years in Valleyfield and then I came back to study Automotive Mechanics.

IoM: Automotive Mechanics  is an interesting interesting field, what did you like about it?

Priss: I liked the courses but the job is really boring.  I learned  how to cut metal, how to weld and I wish that one day I will use this experience for my artistic projects.

IoM: What are you doing at the moment?

Priss: For the moment I am still a model. I have been modeling for more than three years, but I am doing it less now because I am focusing on performing. My goal is to do art performing, which could be anything. The main purpose is to create a performance that will make people stop and think.

IoM: When did you get your first tattoo?

Priss: I was 14. My mother didn’t want me to get one because she was afraid I will change my mind about it. When I showed her that it was the flower that was my sister’s name to remind me of her, because she died when I was really young, she accepted it.

Right now I transformed this tattoo and made it bigger, but you can still see the initial flower.

In this moment I like big pieces and more complex ones, for example my back is just one big tattoo. If I am going to do another one it will be my whole legs.

IoM: So, you want to do more complex tattoos, and transform your body into art?

Priss: I am more into “transhumanism”. I think the possibility of changing the human body is positive as long as we are allowed to choose to do it. If I can choose to modify my body and let’s say for example that I can put some electronics in my arm to help my body or my abilities I will do it. For me it is not only about tattoos, it is about transforming my body. If I can use some devices that can help me I believe it is a positive thing. If there is a way to never get sick, or live longer and for that would require to modify our body, I will do it as long as we are free to choose it.

IoM: When did you get your second tattoo?

Priss: I did a few more when I was 18. When I was 20 my boyfriend was a tattoo artist and he did the tattoo on my back. It was a drawing he drew and I liked it. From far you can’t really tell but it is a piece of art.

IoM: How long did it take to do it?

Priss: We had an idea to challenge ourselves and do the tattoo in one session. It took about 12 hours. He wanted to see if he can do that, because he can never do a 12 hours session with a client  and I wanted to see if I can last that long.

IoM: Wow, that is impressive. Did it hurt?

Priss: Yes. There are some activities where I can endure a lot of pain, for example with shibari I can be suspended by one foot, which is not comfortable but I like it, but unfortunately it’s not the same with tattoos. It is not that painful , but after 2-3 hours you are exhausted and it’s like a cat is scratching you for ever and ever.

IoM: Do any of your tattoos help you in any way? Do they give you inner power? Or do they remind you of something?

Priss: In general I think of  myself as art, but some tattoos are to remind me of someone or just because I am proud of something. For example the Phoenix is to remember the strength I have from my mother and my aunt but also from my grandma. I don’t know my grandma but I feel that she is around me and the flower is all I have from my sister.

This (she looks at her fingers) is the most meaningful to me. I wanted a tattoo that I can see all the time (she talks about the tattoo on her finger which says “LIVE FREE“) because when I was living with my father I could be beaten because I was laughing, and this is not a way to be free. When you are 4 years old laughing is like breathing. I did it to remind myself where I came from, because it is easy to forget. Maybe I’ll do the same mistake as my mother. Maybe I will meet someone that is as crazy as my father. My freedom is the most important thing in my life and I want to make sure I will not forget it.

IoM: How do people react when they see your tattoos?

Priss: Well, I have piercing and weird hair so people kind of expect me to have tattoos.

People that are interested in tattoos are impressed by mine and the way they are done.  They like them because they see it is more as art than just a regular tattoo.

IoM: Do you want to change any of your tattoos?

Priss: No, I want to modify some of the smaller ones and transform them into something bigger.

IoM: What will you say to somebody that is not really sure about having a tattoo but wants one?

Priss: I will tell them not to do it. I tell people that they are better without having a tattoo than to have something that they will regret.

IoM: Will you transform all your body?

Priss: Yes, I want to have a tattoo also on my face. It is part of my project but for now I am focusing on my legs. I will leave my face for last, when I’ll know what I want and I will be sure about it. It will not be something big, but we will see.

Without further ado it is time to see the pictures. 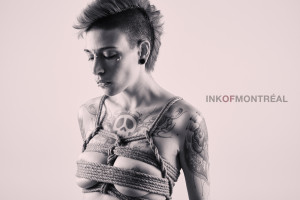 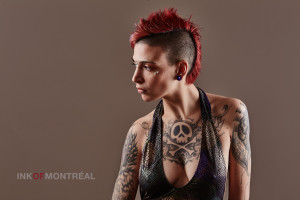 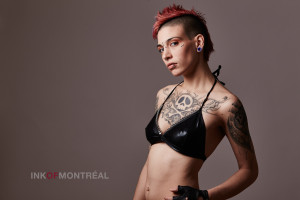 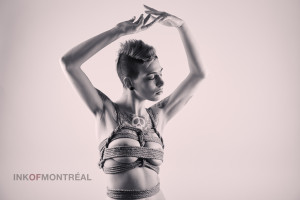 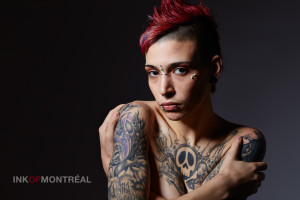 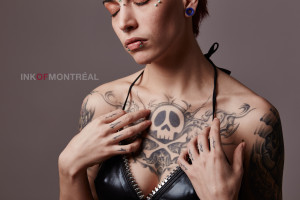 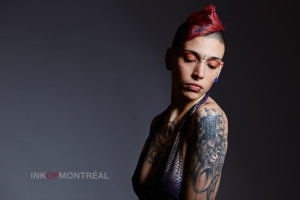 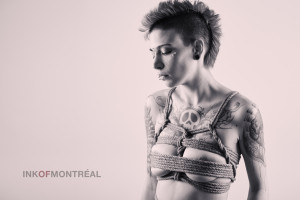 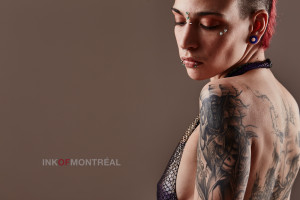 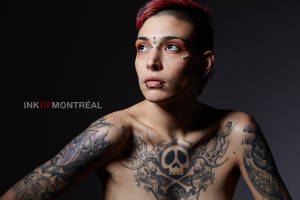 Written by Ink of Montreal